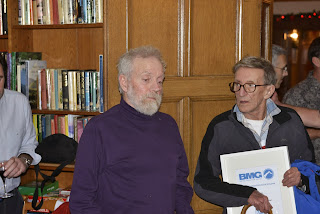 I attended our British Mountain Guides AGM, and dinner and CPD day last weekend. It was a well organised event by the Lakes area . Special thanks to Phil Poole who  must have been hyper busy organising it all on our behalf.  We all enjoyed the best ever dinner!  Our president Tim Walker presented four newly qualified guides with their Diplomas and two older and now retired BMG members, Terry and Geoff were recognised.  Terry was a special inspiration to me personally and since he retired I really miss the fact that I no longer bump into him in the most wild Alpine and Scottish winter conditions.  As a young climber and aspirant mountain guide myself, it was always reassuring to meet him with his friendly, understated manner and listen to his and his clients experiences in white out conditions. Terry was an outstanding ice climber and even when he was older and forced to get replacement knees he could still perform very impressively on the steepest ice pillars! 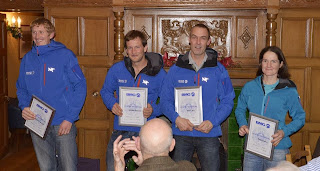 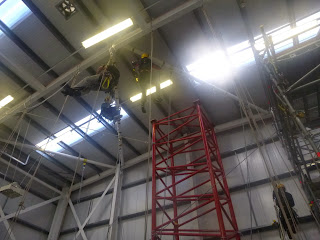 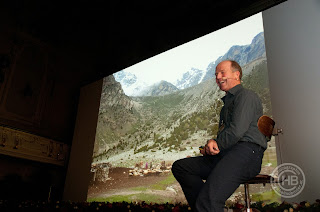 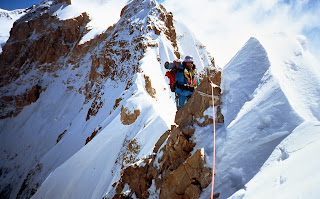 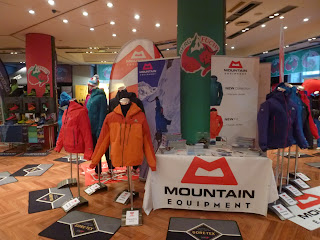 Busy setting up for the 2th Film festival here at Graz, Austria and  met my good pal Robert Schauer who I last saw him at  Latok in Pakistan so many years ago. Its great to see him again .
Mountain Equipment have a stand  here and  Doug speaks this afternoon and we all join in on discussion  on the subject of ' Modern achievements in the world of sacred mountains vs commercialism' which  hopefully will provoke some thoughts!
I lecture tomorrow  on our ascent of the Mazino Ridge and  highlight  some events of the Piolet d'Or. 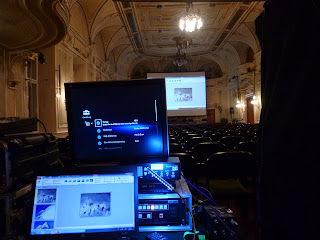 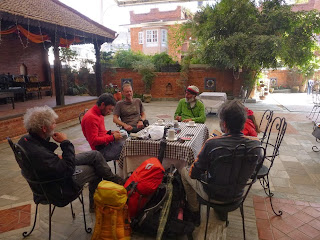 Some of our team enjoying  the relaxed pace of Kathmandu at the Manaslu Hotel. 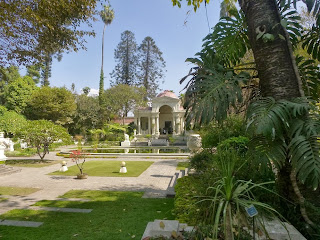 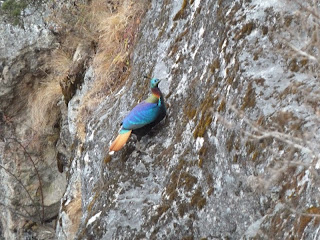 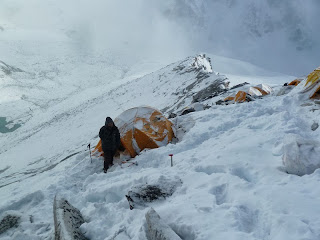 Here is  photo of Camp 1 on Ama Dablam, one can see the amounts of snow we had. 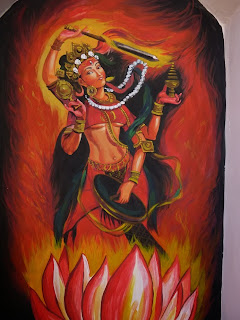 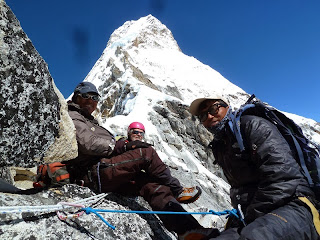 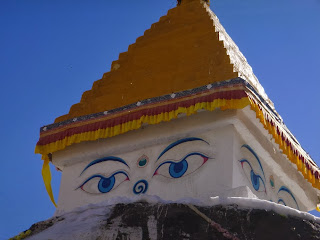 We all arrived back in Kathmandu today after a  nice fixed wing flight from Lukla early this morning. We do not have our luggage though as our Yak drivers got way laid en route and did not arrive in Lukla in time to catch the flight departure time! ( Their excuse is alcohol related!!!!) We have to hang out a day for our luggage to catch up with us. The team are all well and  enjoying the tourist sights of the city! 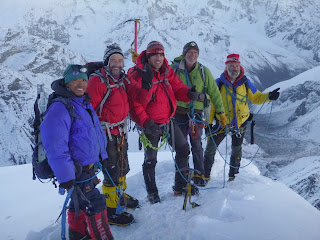 From L to R: Pasang, Mike, Stephen, Ueli and Toni on the trekking summit of Labouche peak, (Corrina was also there but she is not in my photo!) 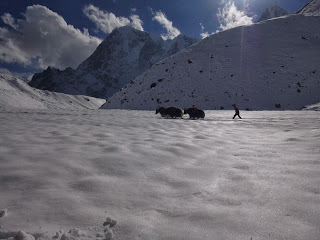 Just arrived back in Namche Bazaar this late afternoon.  Over the past few days we had an exciting time on Ama Dablam, no one had climbed to the summit so far this season so with some of the other guided outfits we combined our forces to pick an elite team of Sherpa to try and go ahead and fix ropes over the Mushroom ridge to camp 3 and onward to the summit. Very experienced sherpas from Team Ascent, Adventure Consultants and Himalayan Ascents  grouped together and on the 2nd of November went from base camp to Camp 2. On that same evening many of them got up to the top of the existing fixed ropes  which reached  almost to the Mushroom ridge. Our  combined sherpa team got a bit higher but were confronted with very steep and unstable snow. It was impossible for them to set any anchors and from Camp one I watched their head torches trace their night time descent back to camp two. The following morning they tried again and again abandoned their attempt in the difficult and dangerous  snow conditions. So, for now any attempts to climb high on Ama Dablam has been forgotten, the snow is unstable and unconsolidated. So yesterday, the 3rd November I had to make the difficult decision to abandon our attempt and many other groups are now following  our decision. We have flights out from Kathmandu back to Europe soon, some  are departing  from Kathmandu on the evening of the 10th November, so time has run out for us.
All our team members are fine,  they understand the situation and while a bit disappointed are experienced mountaineers and know when things are simply too dangerous to push on. From the outset  the big snow fall at the beginning of our expedition gave us the idea that summit success on Ama Dablam would be quite slim. The weather has been unseasonably cold with quite high winds above 5000m , the snow is not transforming in the way that we need it too! An unstable layer remains below a surface crust.We are happy to have climbed Labouche peak and now we are enjoying the trek back to Lukla where we hope to get a fixed wing back to  Kathmandu.  I apologize for the lack of photo, the internet here is very slow!
Publié par Sandy Allan à l'adresse 12:10 No comments: