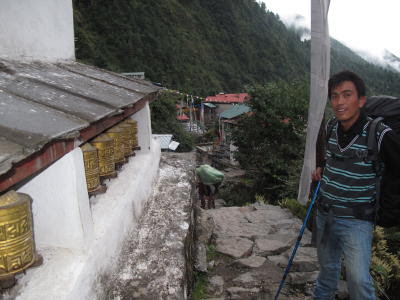 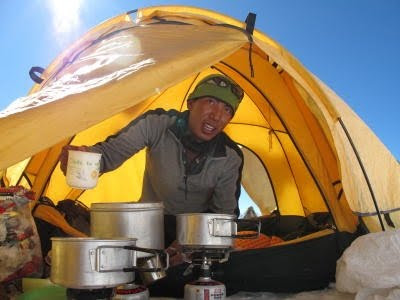 Team Ascent has, over the years built up great support teams, in the various countries they visit. In Nepal and on the current trip too Ama Dablam, the Nepalese Sherpas provide huge support and skill. Sherpas are traditionally Buddhists of Tibettan descent and are renowned for their mountaineering skill. The photo above is of Kusan Sherpa melting snow at Labouche High Camp around 5560 m on 16th October. At high altititude dehydration can be a huge problem. You exhale and perspire at much greater rates than at sea level and the low air pressure results in greater evaporation from your skin and lungs so its really important that you have a very high fluid consumption. This is no mean feat when you are in a frozen environment! One of the major and probably most time consuming chores of high altitude climbing is melting snow for brews! Bear in mind that although the snow/ice is plentiful, the equipment and fuel has to be carried up (and of course, the matches have to be remembered and kept dry!!).
The other photo shows Sherpa Lhakpa at some prayer wheels on the way-in to Ama Dablam and who will at this very moment, be up on the mountain with the team. He has summited Everest five times and climbed Ama Dablam twice.
Publié par Sandy Allan à l'adresse 14:28