Summit success and back in Namche today 28th October 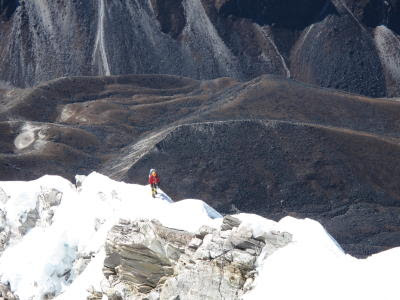 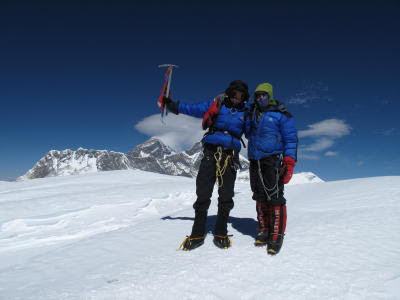 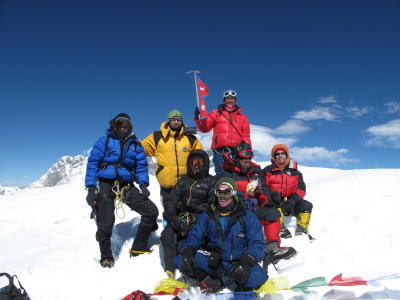 Our team on the summit of Ama Dablam ,25th October 2009: back row from left to right are: Calum McIntyre, Kasum Sherpa, Lhakpa Sherpa. Middle row sitting from Left to right: Richard Lydiatt, Lhakpa Dindi Sherpa, David Flux. In front sitting is Derek Morley. Photo by Sandy and I should say that Dawa Cheri Sherpa was also on the summit with us but does not feature in this photo.
Many thanks to my sister Eunice for up dating the blog with my sat phone reports. This morning 28th October we departed Ama Dablam base camp and will all be back in Namche Bazaar by tonight. We have had a great trip and summited Labouche east , then reached Everest Base camp and Kalapattar and then went on to Ama Dablam base camp. Dave Morris and Matt Evenden did not climb Ama Dablam but they succeeded with the other expedition milestones, Unfortunately Dave had problems clearing phlegm from his breathing tube ( see www.justgiving.com/CalumMacintyre) and
even although he was then put on anti biotics it was simply not prudent for him to attempt Ama Dablam, but the experience of guiding him at high altitudge on Labouche East has been really worth while and I am sure if we have a good chat with the surgeons at Ninewells Hospital, Dundee we may be able to come up with some design improvements and ideas which may help Dave to get higher on other mountains in the future.
On Ama Dablam between Camp 1 and Camp 2 Matt Evenden had to turn back as he had pulled muscle in his back probably caused by coughing lots due to the infamous Khumbu cough, so as it was to painful for Matt to Jumar up the steeper rock walls we saw him safely back to Camp 1 where Matt was able to make his own way back to base camp with the help of our kitchen sherpa staff and Dave Morris. The rest of us climbed on and thanks to Team Ascent logistics and Sandy's very hard working Sherpa team we were able to fix the whole mountain and were the first team to summit. Since then some other climbing teams have rechaed the summit and havevisited our our base camp to say thanks to us for fixing the mountain and establishing the route which is cool and appreciated. There were some big teams who were unable to summit as they could not climb to camp three blaming the bad snow conditions. But our team manged to push the route to the summit and now the mountain is open for all to try! I would like to say thanks to the British Army/ Navy teams who consisted of some war wounded from Afghanistan and other war areas whose good fixed rope was a great help to us. We tried to encourage them to stay on a few extra days and have another go at the summit but they were out of time and had to return to there various postings. Also , I want to say a huge thank you to our climbing Sherpas, Dawa, Kasum, Lhakpa and Lhakpa Dindi.
Our team are doing OK. Some are more tired than others but all are doing fine. It's thought that Calum Macintyre may be the first 16year old to climb the mountain, but he just came to climb and have fun and of course to raise funds for the Teenage Cancer Trust! Well done Calum!
Publié par Sandy Allan à l'adresse 09:24

If you have an interesting point of view or a topic that you want to read more about, NoZombo can fulfill your wish. Our goal is to inform you, inspire you, to arm you with suitable weapons, to give you information that you can use daily and in that way fight against the unknown and unforeseen. Just visit NoZombo . Milestones of Success