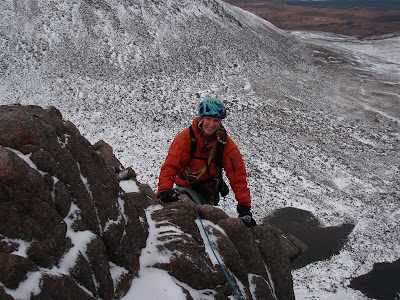 The recent wet and windy weather and lowering freezing level has brought snow to the higher ground. We took advantage of the clearer weather today to walk into the Northern Corries of the Grampian mountains ( wonderful Cairngorm of course!) 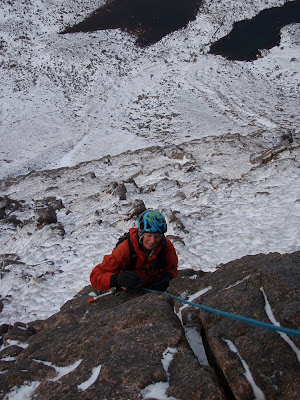 A rope of three of us, Kathy Andy and myself climbed Pygmy ridge. Kathy was by far the most photogenic so she is shown here! First thing this morning the winds were blowing strong from the west and carried a lot of spindrift, but later in the day the wind had died down a bit. The rock was dry and there was some ice forming on Alladins direct and ice forming on the boulders of the approach route. A great day! 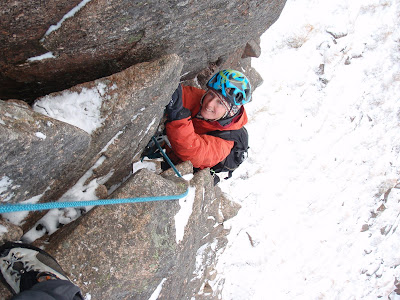 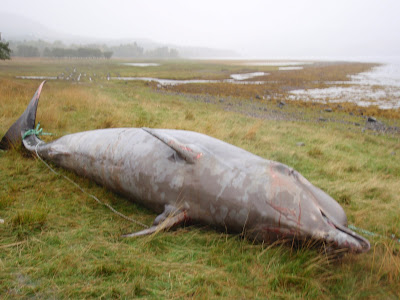 Sad picture of a bottle nosed dolphin which stranded it's self on the south beach at Loch Eil and below shows the "witches tales" at Inninmore Bay. Where the strong westerly winds blow the waterfalls back up the cliffs! 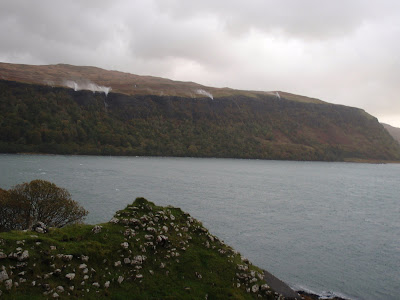 Autumn in the Lakes 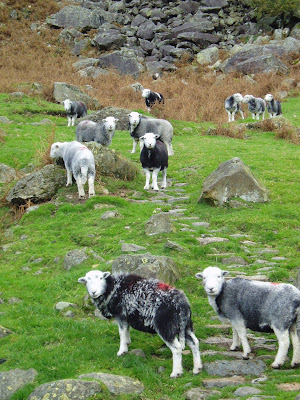 Autumn is here in the lakes, and the magnificent colours are being emphasised with bursts of sunshine in-between showers.
It will soon be tupping time (mating season). Here the girls hang out in the romantic setting of the Langdale fells ready for the boys who are gathering their strength in green pastures below.

There are tales that Herdwick sheep originally came from ship wrecked galleons from the Spanish Armada, true or not we do know that the word Herdwick means "sheep pasture" and that this name can be tracked back to the 12th century. Originally they were used for the production of wool which is renowned for being tough and creates a very water repellent, long lasting garment although a little scratchy. Herdwicks remember their own heaf (area of fellside) which is their native home. Most of the fell farms in the lakes are owned by the National trust including those that were left to the trust by Beatrix Potter (Mrs Heelis was her real name). She held a great interest in Herdwicks and was a member of the "Herdwick Speed Breeders Association" which helped to save the breed. In 1923 "Troutbeck Park Farm" below Kirkstone Pass came up for sale and so Beatrix bought the farm as she was keen to keep it running. During this time she ran the farm herself along with the help of a local shepherd and they managed to build a flock of Herdwick sheep between them.
They are incredibly hardy sheep with a high resistance to diseases, can stand up to appalling weather and are in balance with the environment grazing heather and grass evenly whilst keeping bracken and scrub under control.

Personally I think they are fabulous sheep with cute looks and a lot of character. Dare I say it but they also taste delicious.... 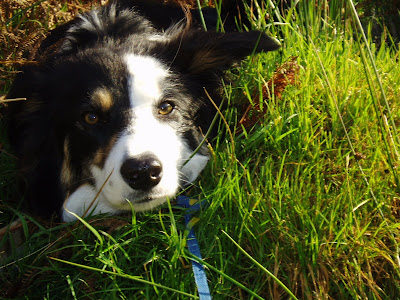 A watchful sheep dog. If you look closely you will notice that she has one brown patch above her eye. Some sheep dogs have two and this is what is known as "bumble bee eyes" 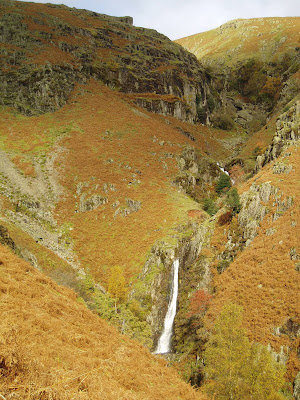 . This was originally bred into the dog to give sheep the illusion that the dogs eyes were still open keeping a watchful eye on them even when they were asleep, clever doggies. 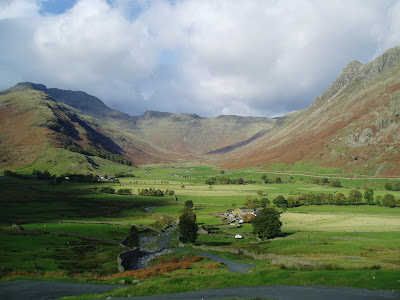 Looking up Mickledone valley Great Langdale, Bowfell to the left and Pike O Stickle on the right.
Kathy 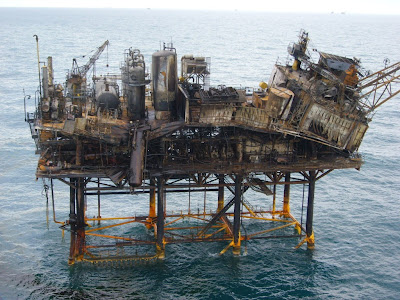 Kathy tells me that back in Newtonmore her Chantrelle mushroom gathering has come to an end for this season. The current wet and windy weather which has also brought low temperatures and snow on the hill tops has caused lots of deteriation to any remaining mushrooms growing in our local birch woods.
Hurricane Ike also caused some amazing damage to the oil and gas platforms 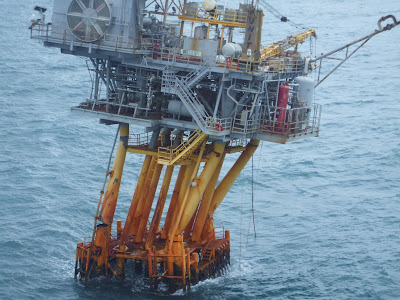 in the Gulf of Mexico and here are a couple of photos from the Eugine Island fields - offshore Louisiana. Yep, it's amazing that a nice winnowing breeze on a sunny beach can transform it's self into a violent hurricane by the time it reached the West Indies and beyond. 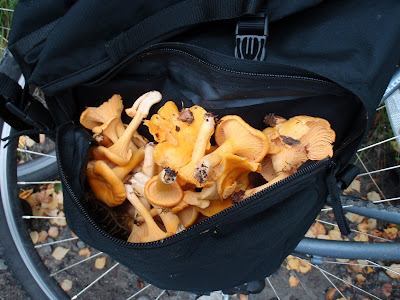 Hoy again - the close of a great adventure 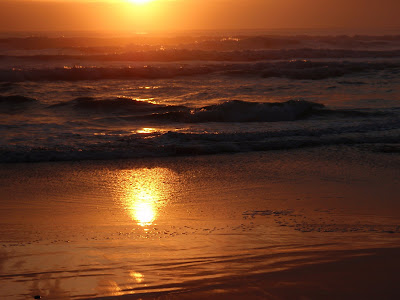 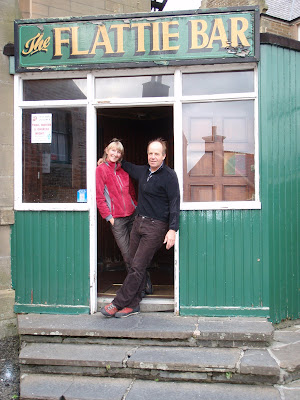 Here is a sunset shot showing the superb turbulent seas which crash into the 1000 foot high sea cliffs and small sandy beach at Rackwick.

Also a photo of us at the popular"Flattie Bar " in Stromness and below a painting by local school children of the ferry which takes you from the Scottish mainland to Stromness.
A "Flattie" is a small flat bottomed boat used by Orkney sailors to row out over the calm sheltered bays to reach their larger and deeper drafted ocean going vessels. 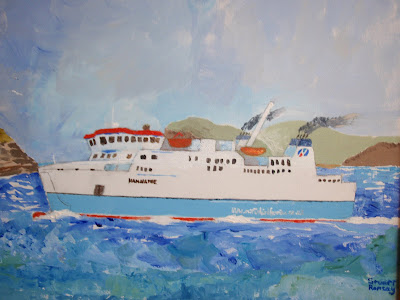 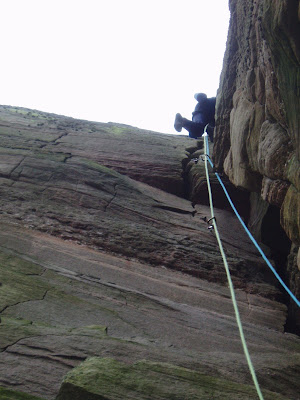 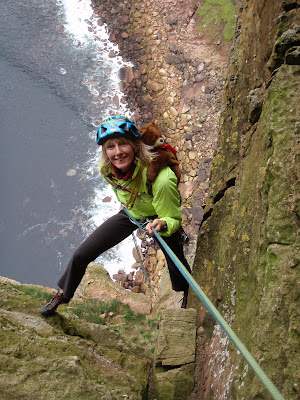 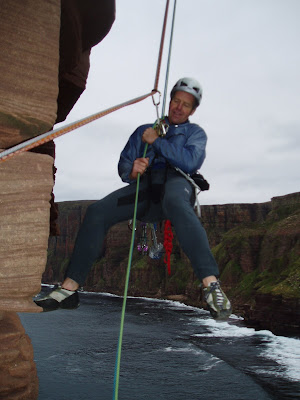 These photos show: Andy leading the last top pitch, Kathy abseiling off after being on the summit and Sandy abseiling, using a rope we fixed during our ascent to guide his return down and over the awkward traverse pitch!