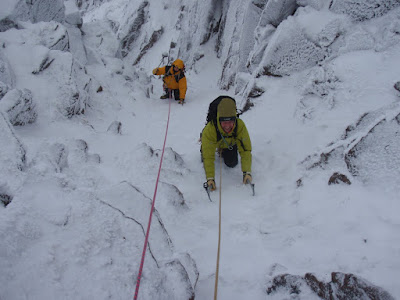 A nice days cimbing today, conditions are not so great but where there is old neve placements are quite good, otherwise its a bit thin 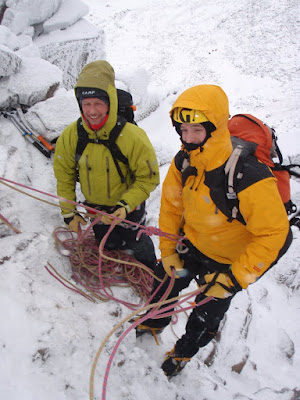 Will and Ian on belay. 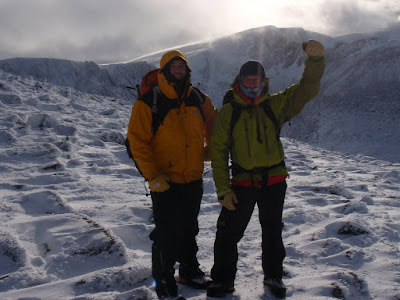 Nice view back into the corrie as we walked out. 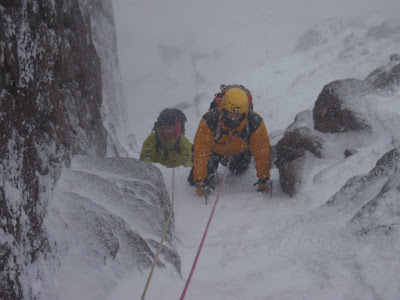 A stormy day in the corries. Will and Ian climbing.
Publié par Sandy Allan à l'adresse 16:35 No comments: 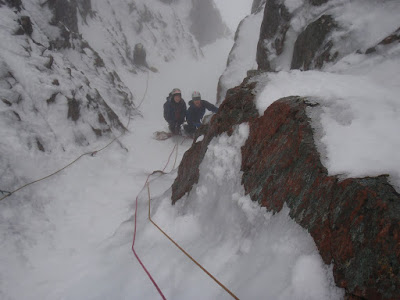 Nice climbing conditions at Nevis Range today, a bit moist but good ice to be had. 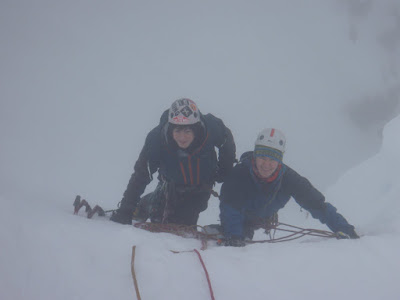 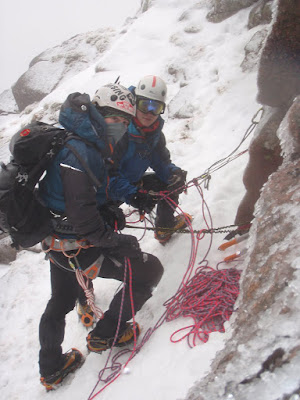 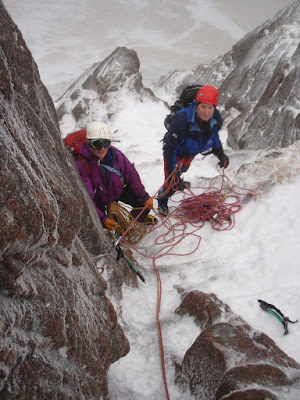 Cold North Westerly winds made it into a more normal Scottish winter climbing day out! 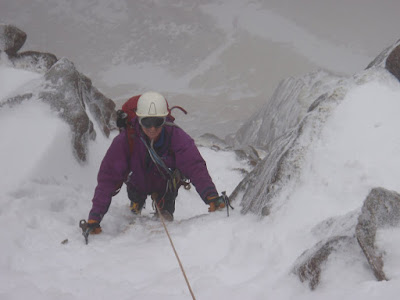 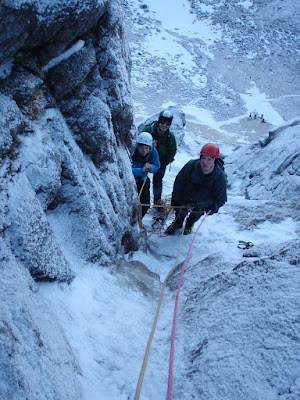 A great day in the Cairngorms today with Kim, James and Mike from University of London. 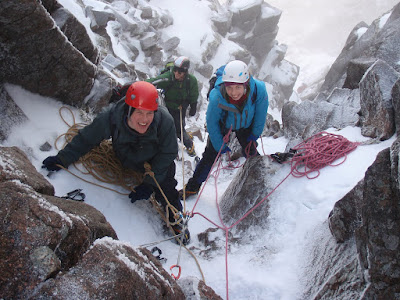 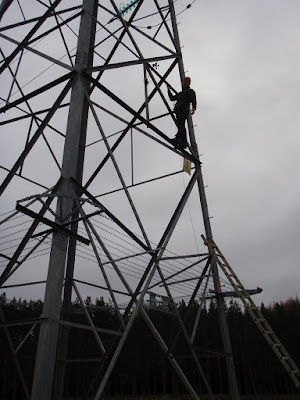 One of our locals asked me to help check somtheing out for them!
Publié par Sandy Allan à l'adresse 17:21 No comments: 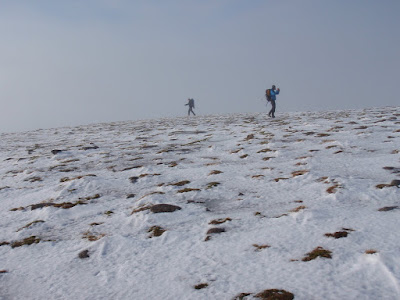 Ha ha, had a great day, the first photo shows how confused my students were with a compass initially, but we got to the top and came down by the Goat Track.... 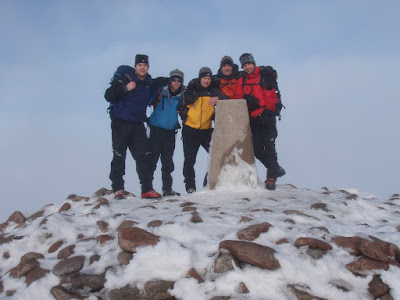 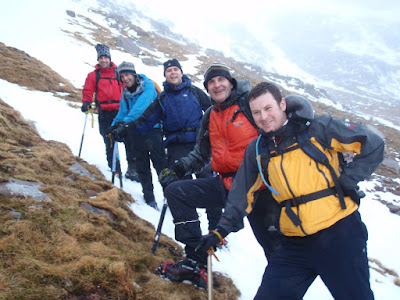 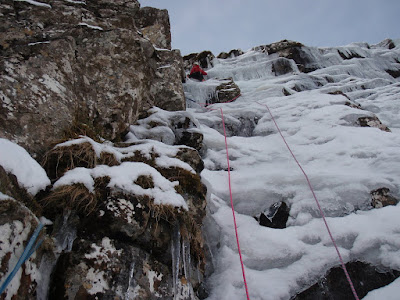 Garbh Chorie Mor of An Coileachan is an outstanding place to be. Many of the climbs get a mention in Ken Wilson, Dave Alcock and John Barry's book, "Cold Climbs". John and I drove up this morning and cycled in as we wanted to look at the central ice falls which are said to be excellent when the ice has formed. Crystal Tripper goes at IV/V and Ravenshead at V,4, We climbed Ravenshead as the ice was reasonable well formed and we found it, thin but OK. Both routes are well known for being sustained, with scanty protection and nice exposure. The slabby nature of the corrie are prone to avalanche and impressive debris were visible today. The first ascent of Ravenshead was made by Duncan Macallum and Allan Russel on 28 Feb 1981. 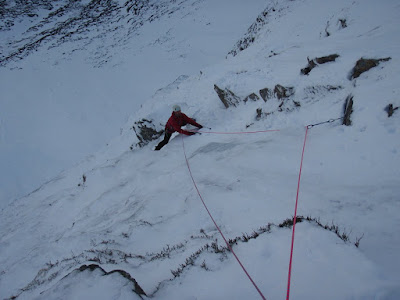 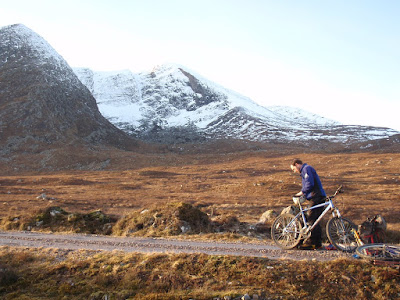 Back at our bikes at the close of the day! Ravenshead climbs the white "central" buttress.
Publié par Sandy Allan à l'adresse 20:37 1 comment: 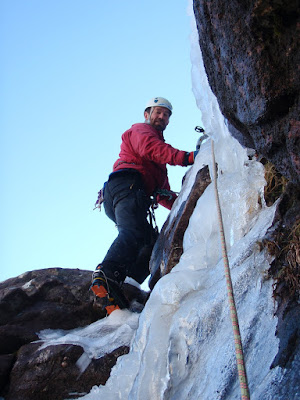 Had a nice day out with John and Andy today, the ice was pretty good but thin in places, turf well frozen and well, an amazing day!

John enjoying one of the early pitches! 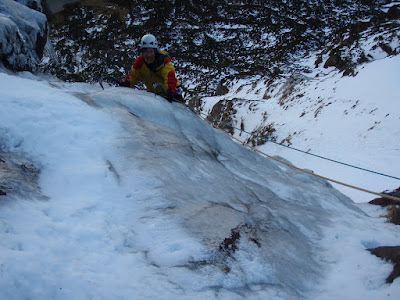 Andy further up on some better ice! 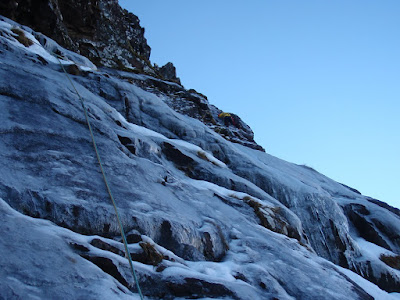 Andy's lead, this pitch was thin but there was adequate ice and good turf.
Publié par Sandy Allan à l'adresse 21:40 No comments: 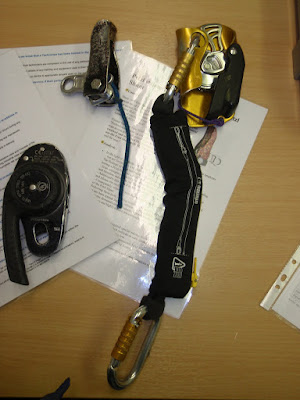 Traditionally Rope Access workers have used the Petzl Shunt as their main back up when working from ropes, however this may be about to change, but then again perhaps not! Many of the newer mobile fall arresters have teeth which damage the rope in general use and potentially more so in a fall. The complex moving parts have also been known to clog up in a dusty and muck encrusted offshore work environment! Where as the simple design of the much trusted Shut works on frozen, soiled or even grease covered ropes! But the operator must let go of the small towing cord on the Shunt for it to activate properly, but its hard to let the cord go loose in an emergency situation as most humans naturally grip harder! Specific training may help to fight that inbuilt human reaction, but its difficult to prove! Rope access specialist providers especially those who are involved in the removal or application of specialist anti corrosive coatings are not over impressed with the "reliability" of the newer products.