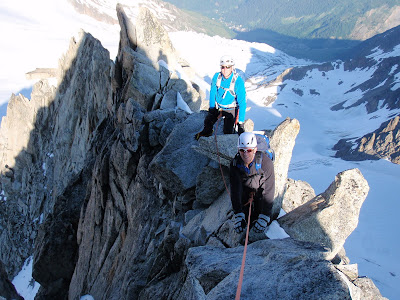 Climbing the ridge, nearing the summit. 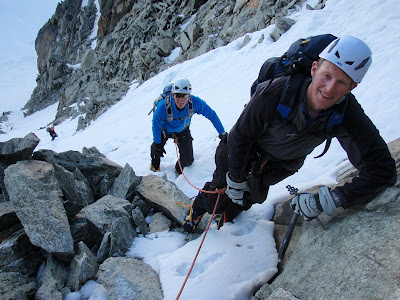 Kevn (Blue top) and Peter almost at the top of the snow gully! 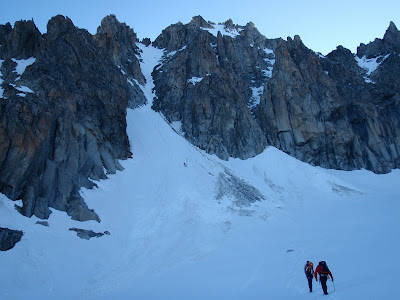 How it looks from the approach!
Publié par Sandy Allan à l'adresse 20:32 No comments: 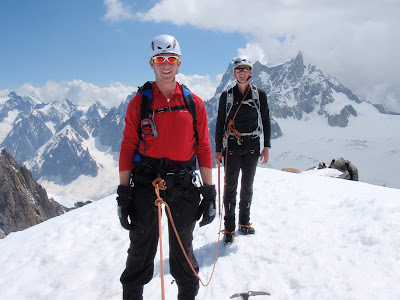 Another nice day around Chamonix, afternoon clouds and high tepmeratures turn the snow soft and slushy. 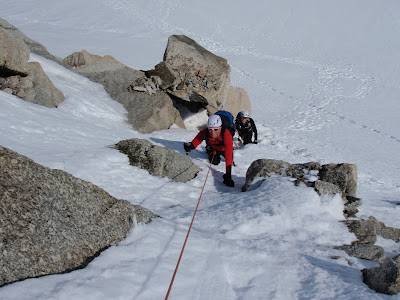 Peter and Keith on the first pitch! 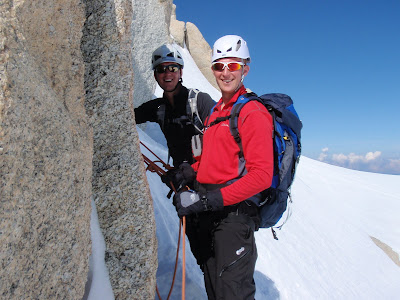 Keith in the shadow, Peter in red beaying me at the start of their first ever climb!
Publié par Sandy Allan à l'adresse 20:30 No comments:

New week and a fine day in the Mont Blanc massif 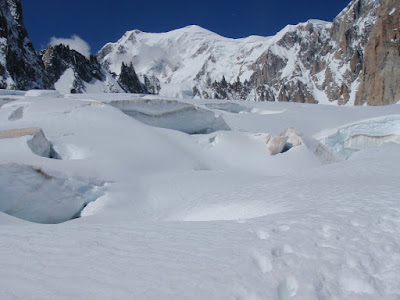 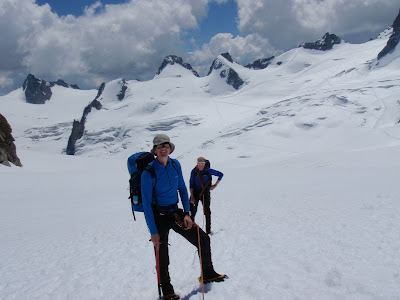 Keith and Peter on their way back up to the Arete du Midi.
Publié par Sandy Allan à l'adresse 18:14 No comments: 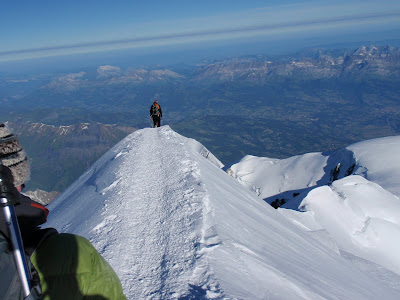 Photo above, taken looking over Brians shoulder as we descended from the summit down towards the Refuge Vallot(4362m) 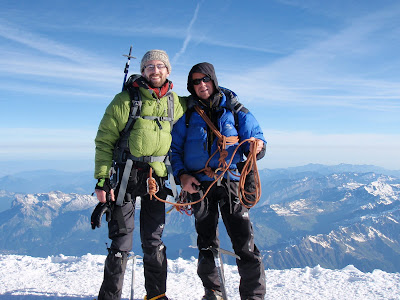 Brain and I on the summit at 7.45 am. Woke up at 1.00 am and after a hasty breakfast we were away from the Refuge des Cosmiques half an hour later. The trail is steep and a bit exposed, but the fresh snows of last week have consolidated a lot and in the early morning the trail was well frozen ad gave good progress! We came down by the Goutier Ridge and it has been an ace couple of days!
Publié par Sandy Allan à l'adresse 18:21 No comments: 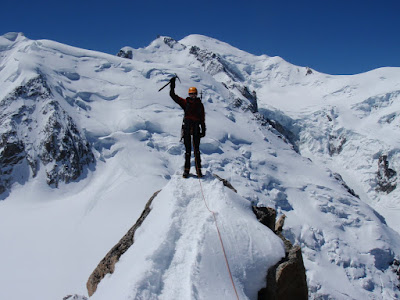 Today has been ace! Like most days really but this one was cool as Brian had never climbed a technical route before so from the photos below you can see he had a perfect day and to be a mountain guide in such circumstances is rather rewarding and good fun too!
Over the next couple of days we hope to do the "Trois Mont Blancs". This will take us from the Aig du Midi (we spend night at the Cosmiques mountain refuge) -tomorrow night-, then go up towards Mont Blanc over Mont Blanc du Tacul and Mount Maudit and hopefully on the the summit of Mont Blanc. Brian wants to traverse the mountain so we plan to come down the Goutier ridge which is the more normal route of ascent. I will let you know how it goes! 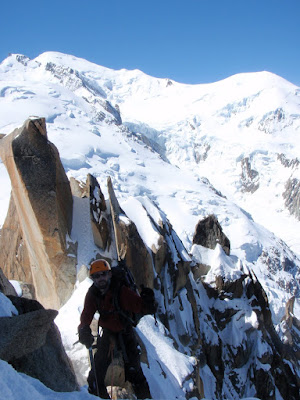 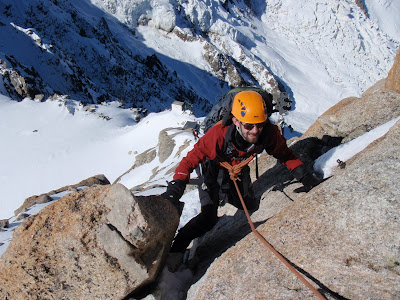 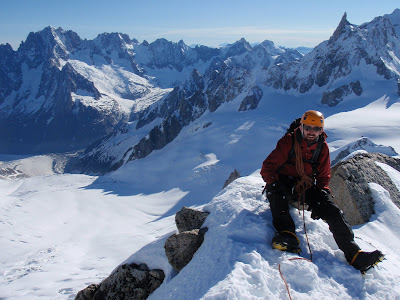 Brain on the Tour Rhonde

Sunny days in Chamonix, it's been unseasonal in the valley an really cold on the summits,however today summer may be commencing! 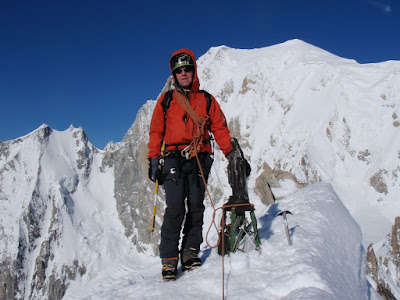 From Scotland to France 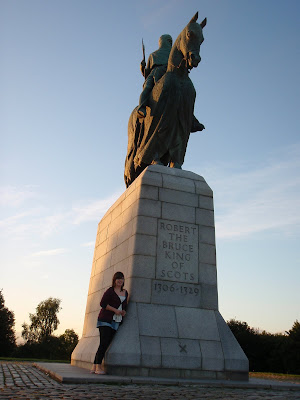 Cara dropped me off at Edinburgh airport for my flight to Geneva and the start of my Alpine summer guiding season, the evening before we visited this ancient battle sight.
My first ever ice climb in Scotland was Vanishing Gully on Ben Nevis climbed with one of my close friends, Robert Bruce (direct descendant to the man carved in stone above) and also Robert Milne a young American hot shot climber who was truly an inspiring climber. Robert ( Bruce) died a year or less later in Chamonix and his funeral was at his parents estate, by the most fantastic tiny church near Mount Keen. I lamented for weeks and it had a profound effect on me. The other Rob died high on Mount Everest just a few years ago.... it's an interesting life eh.... this need and continued fight for FREEDOM! 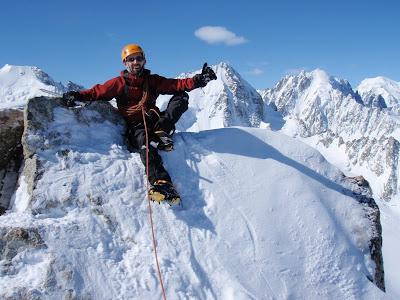 Brian on theAig. du Tour this morning; Over the past few days we took the train from Chamonix to Martigny in Switzerland, a taxi to Champex and then the Barya chairlift. We walked up to the Orny hut and did some mountaineering skills on the galcier before retiring for the night. Today we climbed up on the the Trient plateau and climbed the Aig du Tour and walked around to the village of Le Tour in France, a fine traverse from one country to another! 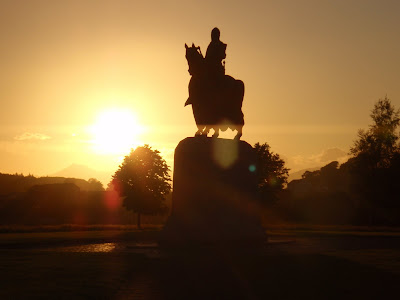 Local walks, do I have to go alpine? 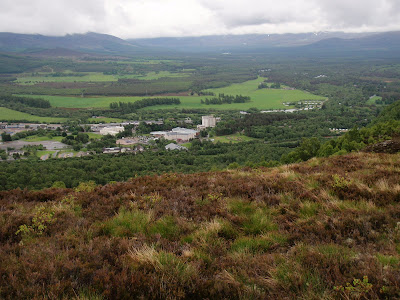 It's brilliant here in Scotland and really one does not have to go anywhere else! However, work calls and its off to the Alps and Chamonix so very soon! Oh la la! 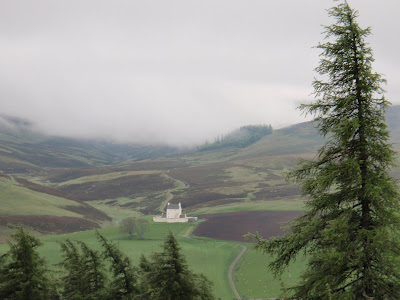 Above: On the way to Braemar this early morning I stopped for short walk before driving on to deliver a talk/course on " inspection of PPE" for the mountain rescue team.
Below: yesterday I was doing a OPITO rigging level 3 re-assesment at EnerMech in Aberdeen, keeping my offshore work tickets up to date: It was great break free and get a walk up Bennachie! The walls are a ancient Fort! 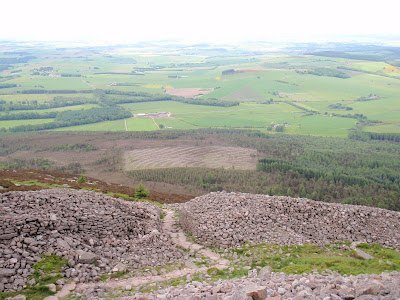 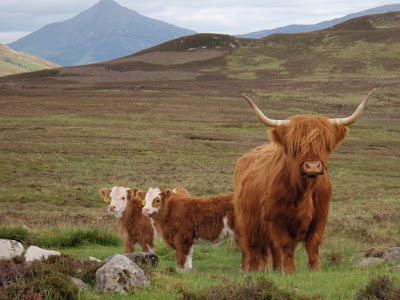 Schiellion with highland cows and calves in the foreground!

An amazingly wonderful day today as I was mountain biking with a friend . We started at Dalnaspital which is west of the A9 trunk road at the pass of Drumochter and then went along the side of Loch Garry passing Durnish which is an outstandingly tranquil spot. We continued on through, to traverse around the base of Gualann Sheileach and eventually down the track which takes the line of the Allt Chreagan Odhair to end up by the shores of Loch Rannoch at Craiganour Lodge. Another wonderful day in the Scottish Highlands with awesome views, masses of tranquility and good company! 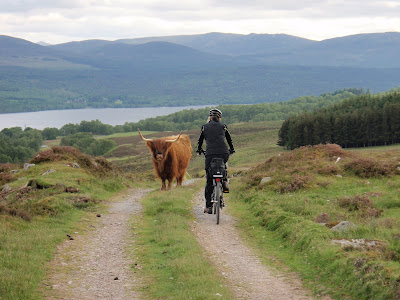 Some hazards were encountered along the way! 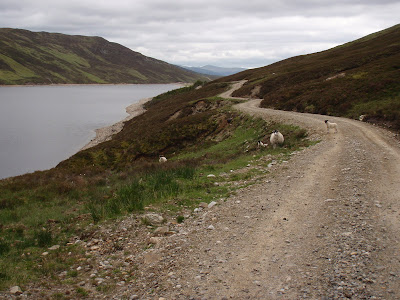 Some fine tracks to journey along, but as my high altitude climbing Sherpas friends in Nepal keep reminding us- "there is no way to happiness, happiness is the way!"
Publié par Sandy Allan à l'adresse 21:32 No comments: 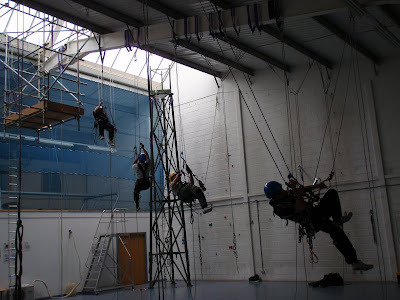 Rain fall in and around Newtonmore today, so it was an ace day to traverse the hills from Dalwhinnie over past Ben Alder on the bicycle! Wow, ace views and one does ask, why live anywhere else? Oh, yes, I have remembered, it does rains a bit here, but what the hec!
Publié par Sandy Allan à l'adresse 18:01 No comments: