What a great spell of weather, for winter climbers anyway, and frozen turf on crags near the road, crags suitable for the “older climber”. But now on Monday 18th, the cold spell was ending, with temperatures forecast to go up to plus 7 on top of Cairn Gorm. Ah well, time for a rest.

But not for Sandy Allan. He wouldn’t let it go. “It’s only going above freezing at 8am, so if we get up early.......”. That was forgetting it had already thawed on the 17th. But it had been cold for nearly 3 weeks, so slowly I came round to the idea that some ice might have survived. And there were a couple of potential ice lines on Lurcher’s Crag (my days of getting up at midnight and reaching some remote crag at first light are long gone). So in the afternoon, I drove up to the Cairngorm car park to see what snow was left, and to choose between the approaches via Chalamain Gap or South Gully. The Northern Corries were still snowy and so were the boulders in the Chalamain Gap, so South Gully it was.

At 7.30am it was still dark and very quiet in the car park. It actually turned out that several keen teams had already left, and we did see head torches high up on the hill. Walking conditions were lumpy on the path from yesterday’s footprints but at least the snow was frozen and we reached South Gully with little stress. The descent was fine too, but then the traverse along the cliff base to the far end was tedious. Would Chalamain have been quicker?

At least traversing the base showed us that there was lots of ice. Diamond Gully (wrongly described as Window Gully in the last guide) was in particularly fine nick, complete with misleading window. So we were in with a chance. Central Gully looked great but we were going further to a potential ice line spotted last year between Ultramontane and Akita (the SMC will produce an app sometime soon). Both of these routes were climbed in deep snow, and we were dreaming that the smears between them could make a good route. As we continued down the crag, the amount of ice was decreasing and I was looking ahead to easier ice at the end of the crag (climbed many times before). Then Sandy said, “What’s that ice up there? I looked up and realised that I’d walked past our potential line. The ice looked thin but the line was complete.

I took the first pitch, up a smear on a slab leading to an iced bulge. The bulge was only about head height and took a solid ice screw. But reaching above it and swinging the axe detached about a metre of ice which slid off and revealed a blank slab. The only option was to come in from the side, and here was a stroke of luck, an excellent placement in normally unhelpful rock allowed a delicate move over the bulge. A rock barrier above was easily bypassed and the pitch was completed under an icy chimney.

Sandy took this on with another good ice screw runner (thank goodness we took the ice screw, a close decision), and soon we reached the easier upper section. Soloing from here eventually gained  the finishes of the other routes, all which finish up a ridge climbed in the 1950s but never named. It was still a long way to the top of Creag a’ Leth-choin and by now it was so warm we didn’t even need gloves.

With the dog theme of the crag, Sandy suggested the name Hot Dog. I thought IV,4 but there’s no doubt it would be III if thickly iced. Whether that happens during this predicted cold winter, we’ll see.
Publié par Sandy Allan à l'adresse 21:11 No comments: 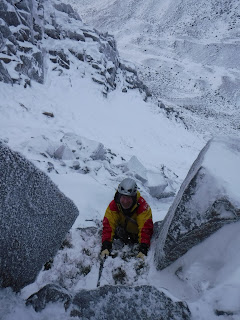 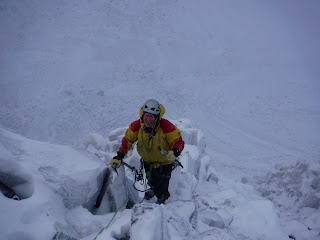 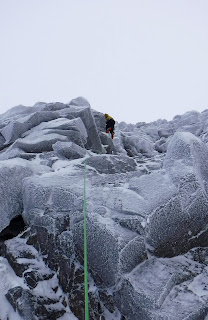 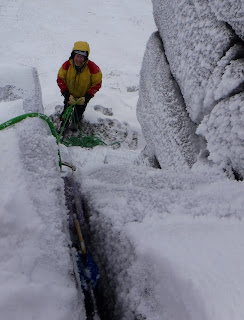 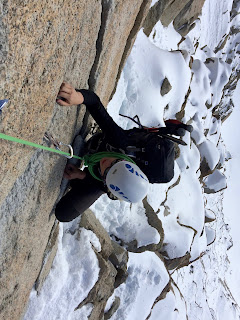 Traverse of the Aiguille d'Entreves (3608m)

Gran Paridiso via the Refuge Chabot